Dear colleagues!
Please consider our offer regarding a well-known to you problem.
Since the 70-s of the last century electrochromic principle of light modulation on the basis of WO3 films has been studied all over the world. It is common knowledge that this research work has been progressing slowly due to WO3 low chemical stability (dissolves in water and all mineral acids) and degradation of electrochromic properties (entropic factor).
Consequently, the perfection level, sufficient for mass production, for example of “electrochromic smart windows”, has not been reached yet.
This problem has been elaborated by us on the conceptually different material and technological basis since we were given the patent USA №3500392 dated 14.6.1966 for electrochromic display (received by us 18 days before Deb’а patent).

It is known that electrochromic effect develops in WO3 films, produced under any technological processes and does not develop in Ta2O5, Nb2O5 films, made under the same production techniques.
A fundamentally new technological conception has been implemented by us. Alloying, modification of composition, structure and morphology of Ta2O5, Nb2O5 and other surface films, will enable to initiate in them an intensive electrochromic effect that has not been observed before. Ta2O5, Nb2O5 according to the chemical stability equal to platinum, do not hydrate, in the films under the charge injection phase changes on short-range order with the symmetry change do not occur (as opposed to WO3), which excludes degradation entropic factor. Displays on these films, produced 20 years ago for military equipment, have not exhausted their resource and may be demonstrated (see photo). 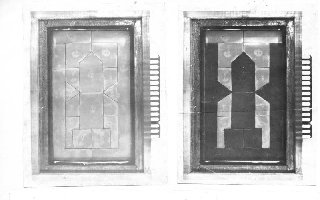 The production of films under the technology in question is by magnetron plasma technique with planar cathode, unlimited in size, which enables to produce regulated pane colour filter of window type.
These films coloration occurs in the “grey range”, not blue as is the case with WO3, which is accounted for by the Drude absorption that has a broad frequency spectrum, ranging far into the IR region with an appearing plasma reflection edge. This peculiarity seems to be of special importance, because it totally satisfies the ergonomic norms of user-display interactions, and, in the instance of, for example, adjustable smart-window pane light filters, this phenomenon may result in considerable energy saving for heating and air-conditioning of living quarters.
Dear colleagues! At present we have achieved a new level of technology, but owing to our general crisis situation we lack the resources for expensive vacuum equipment to complete the research of, in particular, “electrochromic smart windows”. The vacuum machines of the required level are not presented in Ukraine at all. We welcome any reasonable forms of cooperation, know-how transfer, joint patents and so on.
Analysis some of our research works (5) you can find in “Handbook of inorganic electrochromic materials” by C.G. Granqvist, 1995.
If you are interested in this technology development, we are ready to provide more detailed, documented materials and discuss the conditions of cooperation.